Originally constructed in 1935, Fleur du Lac Estates is the modern restoration and redevelopment of the original estate conceived by Henry J. Kaiser, Sr. Perhaps the most famous industrialist of the 1930 to 1960 period in the United States, Kaiser and his companies built the Hoover, Bonneville and Grand Coulee dams, produced thousands of naval ships that helped Great Britain survive the German blockade of World War II, and military aircraft (including a partnership with Howard Hughes in the infamous “Spruce Goose” project). They provided the cement to rebuild Pearl Harbor after the Japanese attack, as well as supplying basic aluminum, steel, and chemical products essential to the War effort.  After WWII, Kaiser Industries expanded into markets as broadly varied as trucks and automobiles, consumer products such as quilted aluminum foil, real estate development, (particularly in Hawaii), health care under the name Kaiser Permanente in 1945, and even entertainment including the wildly popular “Maverick” television series from 1957-1962.  For more information about the remarkable life of Henry Kaiser, we recommend “Henry J. Kaiser, Builder in the Modern American West,” by Mark S. Foster.

As work was wrapping up on the Hoover Dam project, Henry Kaiser, a transplanted Easterner from upstate New York, sought to replicate his pleasant early adult experiences at Lake Placid, New York.  He was drawn to Lake Tahoe as a place where he could pursue his interest in boating, especially boat racing, in a setting even more spectacular than Lake Placid.  Having chosen Oakland, California as the home base for his far-flung business operations, as well as his personal home, Kaiser searched for just the right property at Lake Tahoe to build a refuge from his hectic business life.  He found a 15-acre lake-front parcel in Tahoe Pines that most considered “un-buildable.”  With a stream traversing the property, it was generally quite marshy, especially in the Spring. Having recently finished construction of over 300 miles of roads and more than 500 bridges through much more problematic marshes in Cuba prior to taking on the Hoover Dam project, Kaiser saw only opportunity. Henry knew that the Tahoe property could be transformed by his experienced engineers and crew chiefs.

Beginning as early as the weather would allow in the Spring of 1935, Kaiser tapped his most experienced foreman, Chad Calhoun, to oversee more than 300 workers at the Tahoe project.  Working 24 hours a day, seven days a week, massive steam shovels moved thousands of tons of rocks and soil to fill and level the property. Blackwood Creek was rerouted, the already-existing natural harbor was improved, break-waters were created to protect the harbor, and a beach area for landing amphibious aircraft was created.  Stonemasons, iron-workers, and building craftsmen of all sorts followed closely behind the excavation work to create 15 structures including large homes, small cottages, staff quarters, workshops, and a boathouse called “Harbor House.”  On the heels of the building craftsmen, followed painters and decorators to place and in some cases custom-build, furnishings for all the new structures.

As you might guess, the around-the-clock work created quite a noise problem for the neighborhood, prompting irate neighbors to consider legal action.  But those plans became moot when the entire project, from the first shovel-turn to even the placement of the furniture, linens, and dishes inside the structures was completed in just 29 days!  The neighbors didn’t even have time to hire legal counsel before the job was done.  Henry had done it again!

The architectural design features of the Kaiser Estate were what was known in that era, as the “Tahoe Vernacular,” characterized by a rustic exterior, often including stonework, heavy timbers, and ornamental ironwork. Interiors featured well-finished knotty pine panels and comfortable, but not sumptuous, furnishings.  The beautiful native stone used was obtained from a local quarry owned by Kaiser on land leased from the US government.  His chief stonemason, Eugene J. Re, a well-known local craftsman, was considered to be the premier stonemason in the Tahoe region at the time, and ornamental ironwork was fabricated on-site by iron-workers from the San Francisco Bay area.  As was the case on many of Kaiser’s projects, including the Richmond Shipyards, there was no time for architectural drawings; actual work almost always preceded the arrival of mostly crude drawings.

In 1937, after enjoying the Estate for two years, the Kaiser family decided on the name: Fleur du Lac.  The origins of the chosen name, which in French means “Flower of the Lake”, are unknown.  The Family also relished in giving fanciful names to the other structures on the Estate including Glocca Mora (from the 1947 Broadway play “Finian’s Rainbow” after the original structure was remodeled in 1946), Wild Canary, Fir, Chipmunk, Cat’s Cradle, Rain Barrel, Aspen House, and Hilltop.

Although Fleur du Lac was intended to be a retreat for the workaholic Kaiser men, Henry Sr. and his sons, Henry Jr., and Edgar, continued their worldwide business endeavors as usual via telephone from Fleur du Lac. It was also a very exciting, but very private, social-scene where a host of famous guests from the political, sports, business and entertainment worlds could enjoy all the charms of the Tahoe environment, as well as Henry’s favorite boating related activities.  By 1946, Kaiser had added a boathouse to the property to store his prized racing hydroplanes.  The two most famous names in boat racing on Lake Tahoe during this era were Kaiser and Stanley Dollar Jr. and although Henry Sr. and his second wife, Alee decided to move to Hawaii in 1954, Fleur du Lac continued to be the place to be on Lake Tahoe through 1960 with sons Edgar and Henry Jr. acting as hosts.  But, with the death of Henry Jr. in 1961 and Edgar’s decision to focus on his Orcas Island home in Washington state, Fleur du Lac fell into disuse. 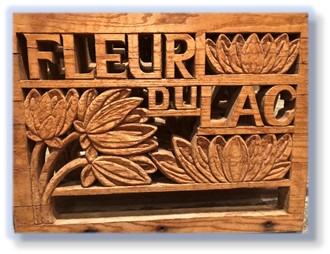 Purchased for what would have to have been considered the bargain of the century in 1962, John B. De Maria became the next owner of Fleur du Lac.  He and his partners acquired not only the property but also several boats, Jeeps and trucks (all painted “Kaiser Pink”, Henry’s favorite color), all the furnishings, linens, and even all the kitchen equipment were included.  De Maria’s initial intent was to operate the property as a “family resort,” and later to pursue some sort of development.  But, he soon learned two painful lessons. First, that Fleur du Lac was a very demanding and expensive mistress.  The complication of the structures and grounds, combined with the harsh winter environment amounted to very steep maintenance expenses.  The economics of a family resort just did not make sense at Fleur du Lac.  Second, De Maria had put together re-development plans just when the environmentalist movement began in earnest in the Tahoe basin.  What ensued over the next few years was the low point for Fleur du Lac.  Trapped with high maintenance costs and no reasonable development possibilities, De Maria turned in desperation to other potential uses, the worst of which was a private boarding school that operated on the property for a short period of time.  De Maria earnestly searched for another buyer.

In an interesting case of serendipity, a new buyer emerged looking for a property with a harbor large enough to house a proposed water taxi boat to serve the South Shore casinos being developed at the time.  James Viso, an entrepreneur, and politician from Santa Clara made what had to be the second best deal of the century in buying Fleur du Lac from De Maria in 1972.  Although De Maria realized a paper profit on the deal, the price paid by Viso was still less than one-third of the estimated cost to construct Fleur du Lac some 37 years earlier!  In many ways, Viso “saved” Fleur du Lac, especially the most critical structures that had fallen into serious disrepair.  He again re-routed the stream that flowed through the property, restored the harbor and sea walls, repaired the damage done to the Harbor House and Boat House and resurrected the grounds.  But, like De Maria before him, he was immediately faced with the burden of simply maintaining the estate since redevelopment just did not seem feasible at that point.  Although he introduced an interesting new wooden boat to the Lake, the “Sea Stag II,” formerly a ride boat in Santa Cruz, Viso soon realized that his boat shuttle service would never be able to sustain Fleur du Lac.  In his quest for creative revenue sources, Viso came up with another option that added yet another fascinating chapter to Fleur du Lac history.

Although there is some disagreement between the De Maria and Viso families as to how the introduction occurred, Viso soon reached an agreement with Francis Ford Coppola to film the sequel to the immensely successful Godfather movie at Fleur du Lac.  Those of you who have seen Godfather II have seen glimpses of what Fleur du Lac looked like in 1973.   Except for certain movie props such as the stone wall surrounding the property, the gatehouse, and the bandstand at the edge of the lake, the movie presents an accurate view of both the exterior and interior at the time.  The memorable scenes where Michael Corleone confronts his brother Fredo about Fredo’s treachery, where Fredo walks across a small bridge in the Fleur du Lac harbor to board an aluminum fishing boat, and where Michael stares out a window toward the lake while Fredo is shot by Michael’s bodyguard were taken in the interior and exterior of “Harbor House”, now called the “Yacht Club.” The scenes in which Michael and Kay are nearly assassinated in a hail of gunfire were taken in the bedroom of Glocca Mora.

As important as the movie was to the identity and survival of Fleur du Lac, Viso soon realized that he must find a way to make the stalled development plans work, or be faced with being dragged down financially by the high maintenance costs.  The next few years were a good case study of what was both wrong and right with the environmental restrictions of the time.  Calling in favors from political friends, Viso almost managed to arrange to have Fleur du Lac acquired by the State of California as a State Park.  When that last attempt failed, Viso became desperate.  He finally agreed to a settlement with the State of California for the redevelopment of the Fleur du Lac property.  That agreement is what made possible the latest chapter in the history of Fleur du Lac.

Stepping in with a fresh set of ideas, an approved development plan, and most importantly, fresh capital, Fred Sahadi purchased the property from Viso in late 1979.  A successful real estate developer in the Bay Area, Sahadi elected to pursue a much less dense development profile than either De Maria or Viso had proposed for Fleur du Lac.  Sahadi’s idea was to create a very high-end development where just 22 homeowners would share the 15-acre property developed by the Kaisers. His plan included additional improvements and modern amenities such as individual boat slips for each homeowner, a new pool and exercise facility, tennis courts and freshly repurposing some original buildings including Harbor House, which is now called the “Yacht Club”, and the original Boat House, which became a beautiful meeting room for owners.  Still, it was painful to remove several of the original buildings including Glocca Mora, Hilltop and Rain Barrel to make room for the new development. Although Sahadi maintained strict exterior architectural control over the new structures, ensuring uniformity throughout the estate, no two homes were alike in their interior finish.  The perimeter wall surrounding the property and a new gatehouse were added as well.  Fleur du Lac had now moved to a point where a consortium of new owners could together provide for future restoration and maintenance of this beautiful and historic property in a manner more consistent with today’s economic realities.